Posted By politisktinkorrektpappa on Sep 14, 2017 | 0 comments 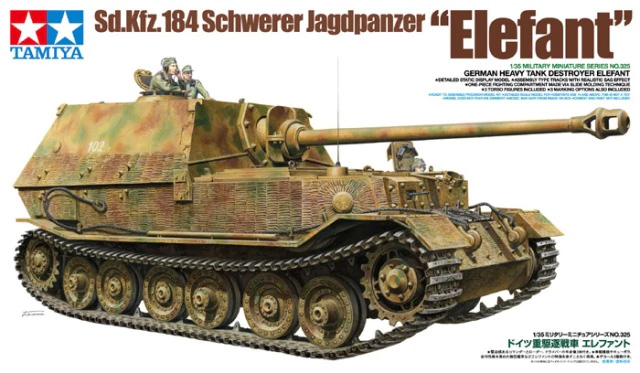 The Elefant (Elephant in English) started its life as the Panzerjäger Tiger (P), a.k.a Ferdinand, after Ferdinand Porsche and was built on the proposed Tiger I chassis that Porsche prematurely had manufactured thinking he’d win the Tiger I manufacturer competition – which he didn’t. He sat on 100 Tiger (P) chassis and they had to be used for something and thus they were made into tank destroyers and deployed to battle in Kursk. In fact 89 of the 91 produced were sent to Kursk!
Things didn’t go as planned and only 50 survived the cunning Russians who hid in in trenches and hurled molotov cocktails onto the Ferdinands and that was that. 48 of these 50 were repaired and modified to include a ball mounted MG34, a commanders cupola, thicker armour, wider tracks and a zimmerit coating.
Although the Elefant was improved, there were still issues, but purely from a kill ratio per destroyed Elefant it was the most successful German tank destroyer in WWII. Sadly only two exists today…

That was some background to the mighty Elefant. What about the kit then?

Yet again Tamiya shows that this is their territory. Super high quality of the sprues and I can’t remember even the tiniest pieces of flashing. Good job! Assembly was easy and there were no issues whatsoever. I wish Tamiya could start slide moulding their barrels so we didn’t have to worry about seams that needs lengthy filler, and sanding, sessions but it’s part of the hobby I guess. Just would be convenient. 😉 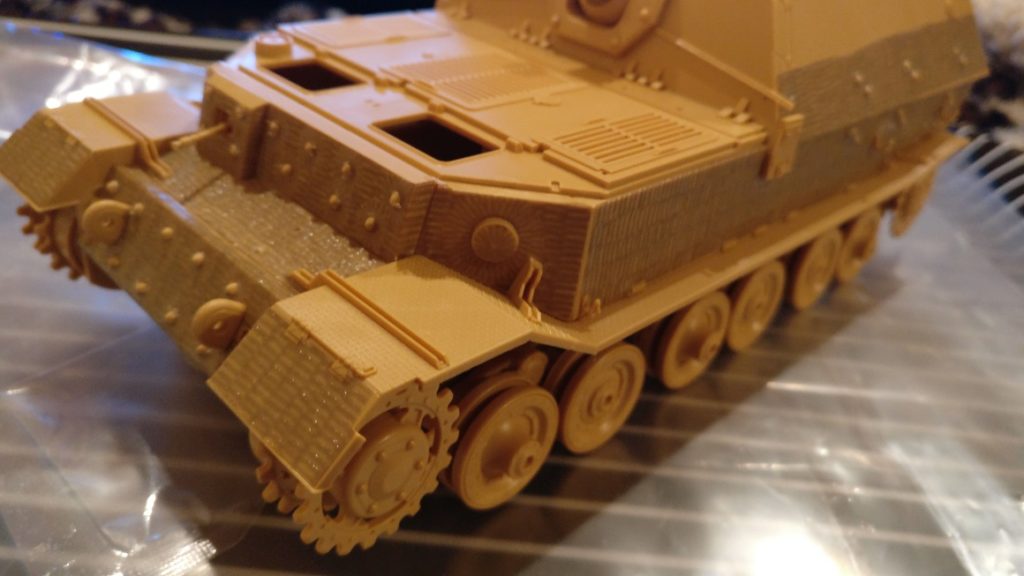 Instead of making a DIY zimmerit I opted for the Tamiya vinyl zimmerit sheet which on picture looked like the best thing since sliced bread! Sadly this was not the case, and I’m going to explain why. 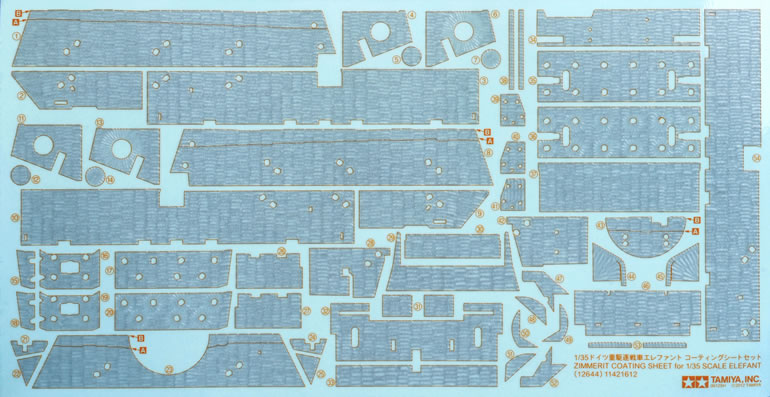 The Tamiya zimmerit sheet is just one big sticker with texture. All the little pieces, and we’re talking about a fair few here, needs to be cut out manually. There are clear lines where to cut so that wasn’t a problem, but since a lot of the added armour on the Elefant was bolted on – this required that you cut a lot of holes in the zimmerit sheet – and this turned into a huge problem for me!
If I’d had a couple of small hole punches this could’ve been easier, but I had no such tools, so after trying to cut a couple of failed holes I resorted to using very sharp PCB (circuit board) drills to manually “drill” holes in the right places on the zimmerit pieces.
The edges weren’t perfect and it took some practise until I comfortably was able to make all these holes, but great it wasn’t.
The jagged edges it left created another problem down the line too.

If we stop here for a second and think what this zimmerit sheet could’ve been if Tamiya had used a laser cutter to pre-cut all these parts instead of having us modellers to do it ourselves, this could’ve been a winner for sure. Sadly nobody thought of this… 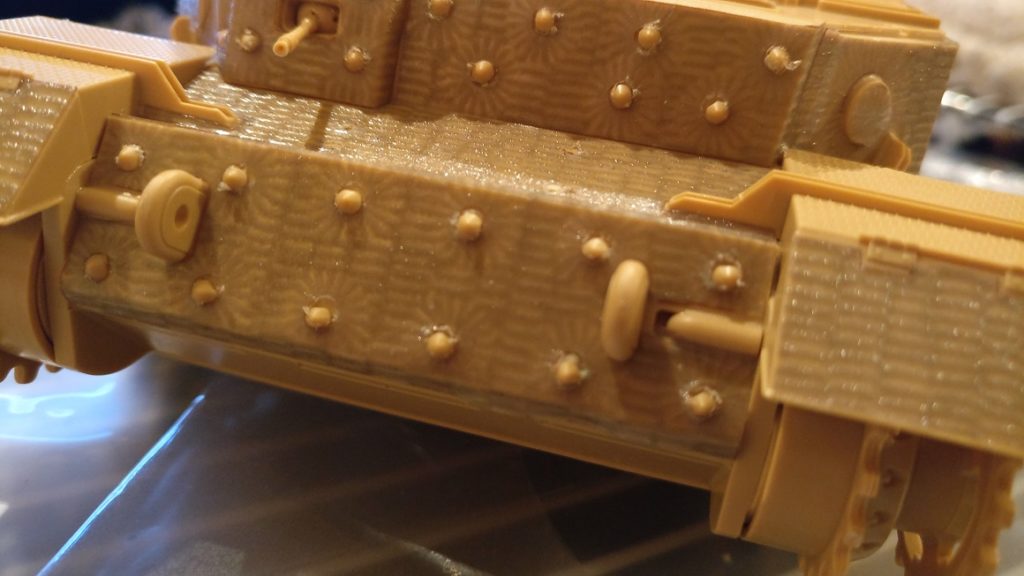 Prior to applying all these stickers I cleaned all the surfaces with cellulose thinner to ensure they adhered. This almost worked.
The day after I’d applied the zimmerit more than a couple of pieces had started to let go. Especially around the holes I’d cut/drilled, but also where the zimmerit bordered to a sharp edge. I had to use CA glue to fix some of these stickers along the edges.
I let the model sit for almost three weeks to see what happened because I didn’t want to discover that the zimmerit was going to start to fall off after the model had been painted and weathered! More CA glue was required and an attempt with a scalpel to trim some parts that were stubborn. I sprayed the model with primer and now it’s sitting again for some weeks before it’s going to be painted and weathered, and I hope nothing lifts again…?

The idea is great because even a beginner can make a good zimmerit coat without having to use a hot screwdriver, or messing with putty and zimmerit tools – which isn’t perhaps catered for beginners. I do wish Tamiya could change the formula for the “sticky” glue they’re using on these zimmerit sheets, and most importantly – use a laser cutter! If that’s addressed it’s a winner in my humble opinion.
As it is right now I’m unsure if I can recommend this or not? Tricky… We yet don’t know how this is going to hold up in one year, or five either.

The zimmerit sheet gives you two different options for zimmerit coating. This I liked!

So to summarise the Tamiya Elefant all I can say that it is, like the Nashorn, a really well made scale model. The Nashorn is crisper and tighter, but the Elefant isn’t far behind. There were no PA parts, and honestly I didn’t miss any because the plastic details were great as they were. Everything on the Elefant is pretty chunky anyway. I did use a little putty on a couple of seams but nothing out of the ordinary. Sadly it only comes with rigid track pieces, i.e. non-working tracks – which I don’t like. The tracks did look great though so nothing wrong with the looks, just that I prefer “working” tracks. Best when supplying two options and include “rubber band” tracks as well as Tamiya, and many others, normally do nowadays. 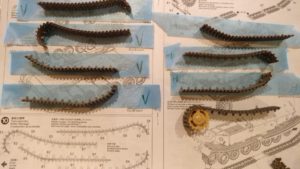 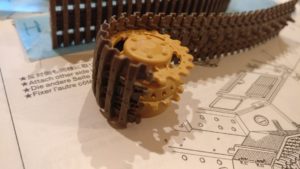 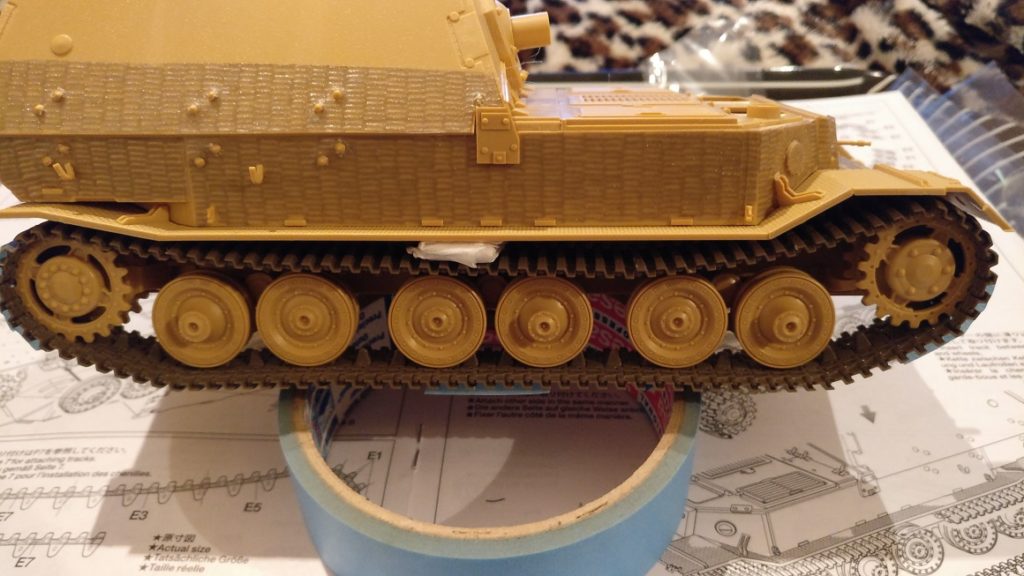 The Elefant kit (excluding the zimmerit sheet) is a solid 4 out of 5! The vinyl zimmerit sheet as it is right now sadly get a 2 out of 5 due to the issues I, and many other, experienced. If they are laser cut from factory and have a look at perhaps using stronger adhesive this will be an easy 4 out of 5. Tamiya, if you by any remote chance are reading this, please have a think about this because I like the concept!