Posted By politisktinkorrektpappa on Sep 27, 2017 | 0 comments 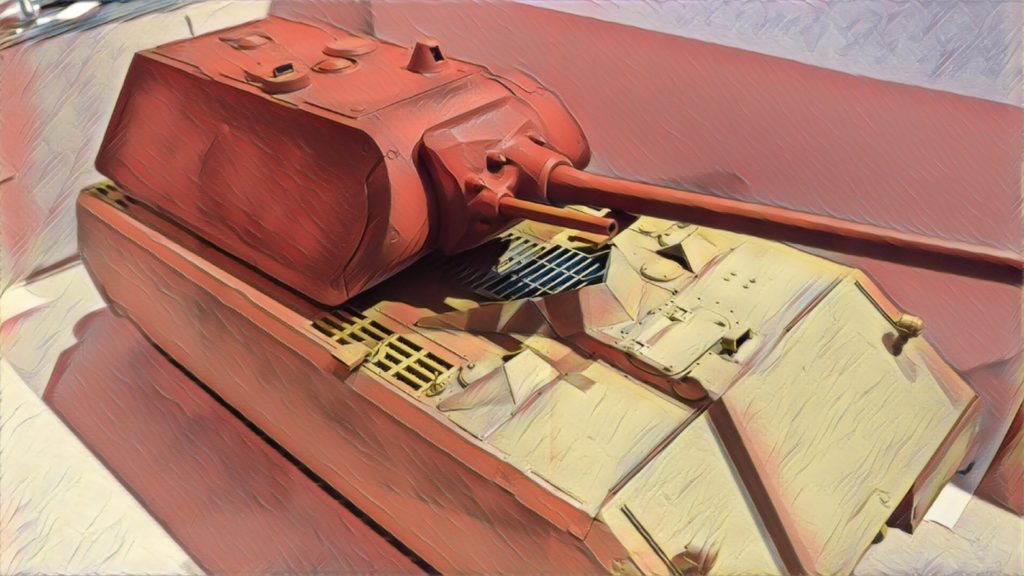 The mighty Maus was one of the final projects in Hitlers Wunderwaffe programme, and the last one to be built. (apart from one E-100 prototype chassi) Only two were ever built, whereas only one is remaining – in a very sad state in a Russian museum (Kubinka Tank Museum), and it’s the Maus V1 with the V2 turret.

If the Maus had been finished and put into production it would’ve been a mighty problem on the battlefield – unless you take into consideration the laws of physics because this was one heavy tank! In fact it is the biggest tank to date to be ever built – and there’s a reason for that because it would’ve suffered anormously as soon as it hit wet grounds, that’s my opinion anyway…

The Maus does display that the Germans were cunning and that they could build things nobody else could even dream about, but this was also partly their undoing. The Sherman and the T34 wasn’t best in any area and yet they won the war. This because they were mass produced in vast quantities and the bugs were sorted out. German tanks were obsolete almost as soon as they rolled out of the factory and after Panzer IV there were fewer and fewer revisions of each generation before it was replaced.

Enough about that because this is about the Maus – Panzer VIII, weighing 188 tons and sporting the 128 mm KwK 44 L/55 gun, and 220 mm armour where thickest! No Sherman or T34 would hardly even scratch that.

This kit from Takom is obviously based on the Maus V2 (Maus V1 is also available from Takom, with a dummy turret without a cannon) and I have to say that they’ve done a really good job – within reason. Some details are a bit crude, but so was the Maus.

In fact this is a really simple kit to build – with one exception, the tracks! 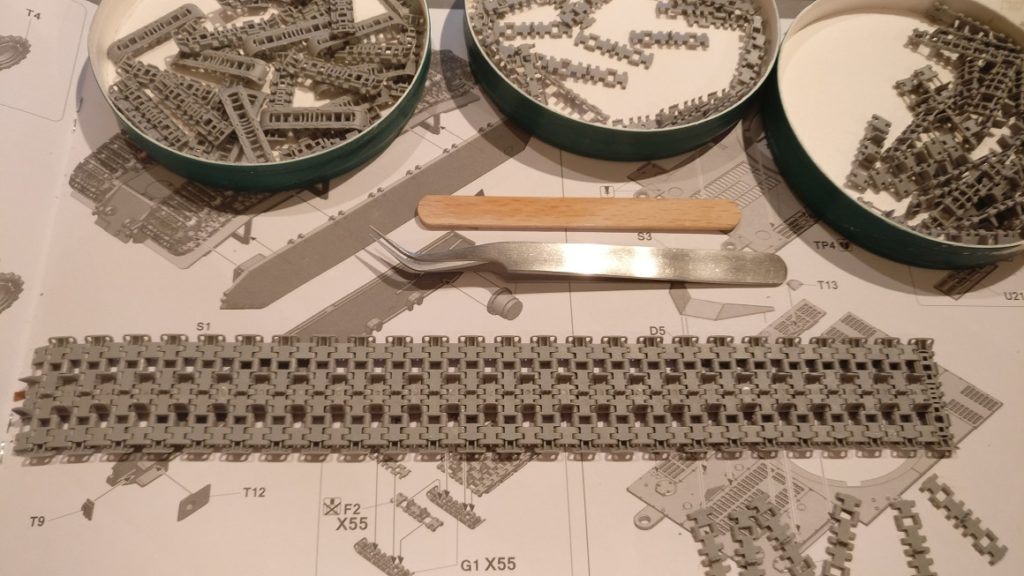 You will probably spend a good 90% of the time building this kit in link assembly because the tracks consists of three different parts, and each track consists of 54×3 pieces, which means that in the end you have to cut off, clean, sand and glue no less than 324 parts (330 according to the instructions)!!! The tracks are looking fantastic though so it was well worth the effort – and I find tasks like this really therapeutic.

Prior to the tracks you have to assemble the suspension and it is a somewhat “working” suspension, but the suspension travel on a real Maus was very limited and so is the suspension on this kit. I recommend that you build all the suspension modules in one go and do each step for every part until you go on to the next step in order not to get one of the suspension units backwards or similar.

The only part of the build that didn’t fit 100% was the deck and the side panels. I just couldn’t close all the gaps fully, but that’s a simple thing to fix with putty. I use liquid putty made by squeezing a tube of Tamiya white putty into a jar of Tamiya extra fast cement and mix, and presto – you’ve got a liquid cement that’s perfect to use of tiny gaps. It also dries very fast, and much harder than normally, so give it a go! You also must be sure to follow the instructions and not glue both side panels at the same time because then you’re in for a major problem fitting the front (U1) and rear (S6) panels because they interlock. Lesson learned here… 😉 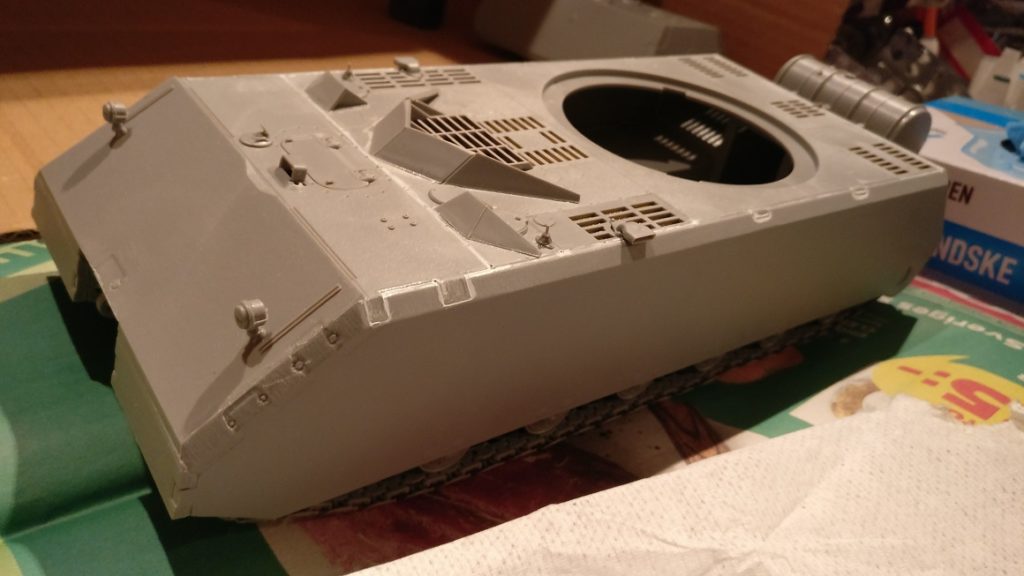 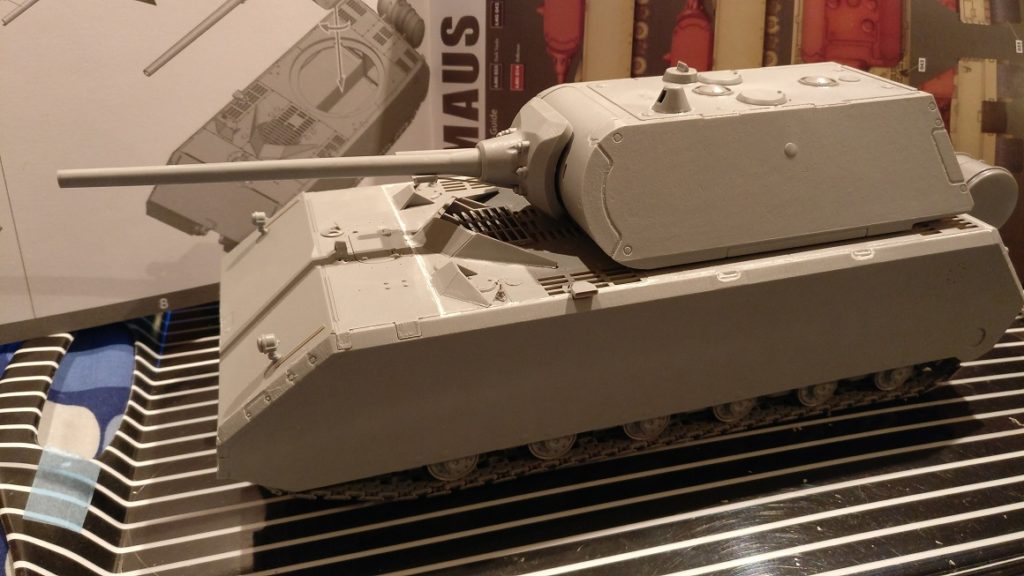 Apart from this there are no pitfalls with the Takom Maus V2 and I enjoyed building this kit so much that I’m going to build another one at some point!

Look at the size of the Maus turret compared to this Jagdpanzer IV hull! A mighty beast for sure! 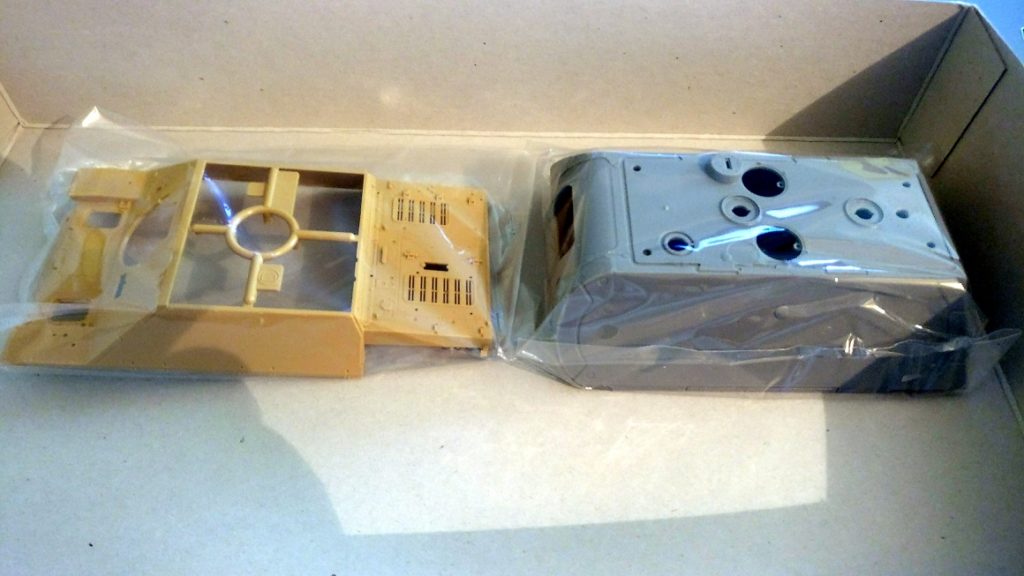 The Takom Maus V2 (or V1) isn’t the kit for rivet counters because it’s a scale model of a rather crude and rough prototype of a tank that was never going to be, but not from lack of trying. It was just too heavy and complicated to shift. I mean how can you build a tank that can’t get across the bridges in the area it was designed to fight in? But putting that apart, every enemy that would’ve faced a Maus on the battlefield would’ve run as fast as they could in the opposite direction and I’m not sure they’d ever stop! 😉

I loved building the kit and I’m the type of person that actually like complicated, but working! tracks like we have here, and it was really fun to paint in the end because I chose a “what if” paint scheme and not the one it was found with. The decals that came with the kit were few and simple but the real Maus had very little markings, and one of them was a fake Russian marking – probably to fool anyone seeing it thinking it was Russian and not German? This is included in the decals.

So if you’re looking for that large end-of-war Wunderwaffen to complete your German lineup then this is the kit for you. If you’re into paper panzers and “what if” tanks this is also the kit for you, but if you’re into ultra detailed builds with lots of custom details this is perhaps not your first choice simply because there’s only one existing to gather details from, and that’s not a detailed tank to begin with.

There were some issues with fitting the hull pieces that required putty in almost every place where the hull plates interlocked, but we’re talking pretty big plastic pieces here and thermoplastics are prone to minor warping and even shrinkage when getting large so with this in mind it’s not a bad kit at all!