Posted By politisktinkorrektpappa on Oct 3, 2017 | 2 comments 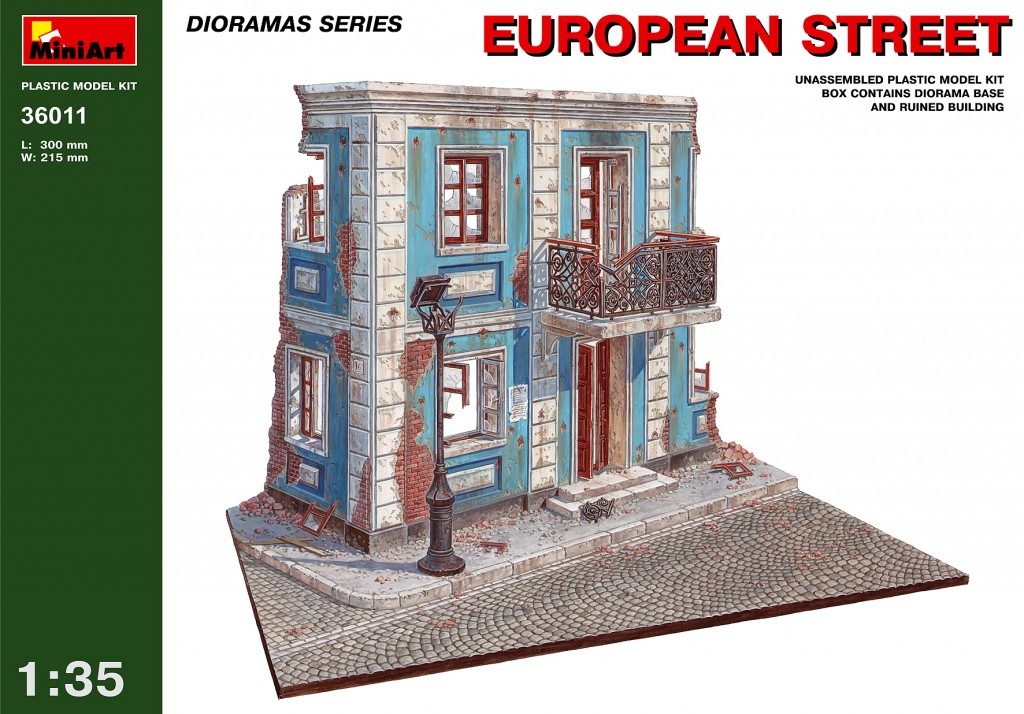 MiniArt has some beautiful diorama buildings that are notoriously famous for being hard to assemble, or are they?

Ever since I saw a couple of the “European” diorama buildings from MiniArt I really wanted to build one, as a base for a small scenery during the WWII conflict in Europe, but wherever I searched all I found were people telling how hard it was to assemble and that it was a technology from the past – vacuum forming.

Back in the days vacuum forming was all we had apart from die cast white metal, a.k.a “tin soldiers”. If we managed to assemble vacuum formed plastics back then why shouldn’t we be able to now? Especially since more or less every modeller has a bottle of MEK at home, or more commonly known as “cement”.

A few weeks ago I decided that I’d waited long enough now and it was time to get one of the European themed dioramas from MiniArt and give it a go, and I chose “European Street” as the subject to build.

I opened the box and found two identical sprues of details like windows, lamppost, doors etc and the dreaded sheets of vacuum formed thermoplastics. I’d heard several methods for cutting out the pieces with everything from a scriber/nail to a scalpel. I chose my model knife and decided to use an old blade that had a blunt tip from cutting PE parts two days ago.

It only took a couple of minutes, perhaps 20, and all pieces were cut, including the holes for doors and windows. I omitted the wooden beams for the rear side because I will use real wood for these, but they are very quick to cut loose since they’re mostly just straight pieces.

After cutting all the pieces I went through them and cut away anything that was sticking out, to make sanding easier. I then taped a whole A4 sheet of 220 grit sand paper to a tray and sanded the wall segments, cut side down, until even. This wasn’t as quick as you might expect since the plastic flexes, but take it slow and easy and you’re soon there.

After trying to dry fit the wall segment and realising it will be a complex glue-up, just like the rumours said, I took the cut-offs and made narrow strips that was cut in short lengths that I glued to the outside of the “holes” to all windows and doors in order for the mating part to register and force it to stay in place. I sadly didn’t take any photos of this to show you but I hope you understand what I mean? If not then write a comment and I’ll try to explain better. When this was done I just pushed the parts together and it was time to glue!

Even before I started this build I knew it was going to be really hard just using cement so I grabbed my bottle of LiPo (c) 😉 No, it’s not a bottle of batteries, it’s a bottle of Tamiya Extra Thin Cement i.e. MAK solvent, that I’ve dissolved pieces of sprue into until it became quite thick. In other words “Liquid Polystyrene”! This is something all modellers should have in their arsenal because it works like cement but dries as plastic and it can be used to fill cracks, but instead of putty you are filling with the same material as the model is made of.

Using my LiPo it was super easy to glue all the parts and before I knew it it was done! 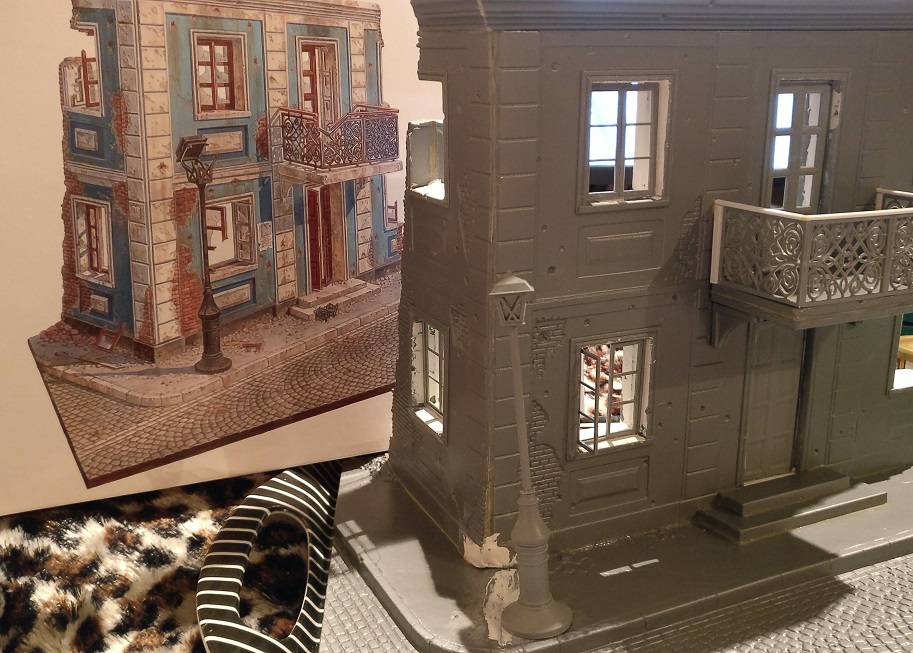 (don’t mind the lamppost in the picture… it’s not going to be used, I just put it there for the picture)

Let’s talk about the obvious things then. A vacuum formed kit isn’t going to just glue together when cut out. In fact you have to do a lot of work making sure all mating surfaces are even, and because we’re using thermoplastics this means that some bits that are supposed to be straight might be bent, which has to be fixed. You will need putty or some sort of filler. I mainly used my liquid plastic concoction (that I above called LiPo) and that took care of ~90% of the putty need, but the inside of every window and door will require putty, as will some corners and other features. This is how this kit is designed and this is perhaps why these kits have a bad reputation – because people weren’t prepared for the work that was needed? By using my LiPo it was a breeze!

The windows kinda fitted but the doors needed a fair bit of padding. This you do with cut offs cut into thin strips that you cement to the doors until they fit the frame/hole.

My wall segments also didn’t fit the moulded tracks so that required some surgery too before it sat in place, but this is also pretty normal I think.

Often vacuum formed bits are of pretty low quality and it’s obvious that MiniArt have mastered this throughout the years – hence why they are still doing it. The benefit is that it’s a much cheaper method than injection moulding, which makes it cheaper for us – the modellers. An injection moulded kit of this diorama would cost a lot more than this costs, and still many parts would still have to be vacuum formed, unless they were cast in resin – which would make it even more expensive! With this in mind I think these vacuum formed kits from MiniArt are both great fun, great value and fun to build if you build them like I did, with extra strips to register/mate the pieces and dissolved styrene in cement as glue & filler.

It’s perhaps not the kit for the absolute beginner, but it’s by no means complex – it just requires some planning and the right tools in front of you!

So what’s the verdict then, on a scale from 0 to 5? Well, a vacuum formed kit will probably never get a 5 simply because the detail and fit isn’t just there, but with this being a vacuum formed kit and with such high detail I will still give it a 4 out of 5 simply because it was much easier to assemble than it’s got a reputation for and the quality was better than expected! It is without any doubts the best vacuum formed kit I’ve ever seen or assembled so far in my life! Well Done MiniArt for doing this and showing you can make scenery without expensive resin production.

I will buy many more scenery/diorama products from MiniArt in the future – that I can promise you! 🙂

I might add some pictures later when primed, painted and weathered, just so you can see what it looks like. Until then you can look at these pictures from the MiniArt webpage.