Posted By politisktinkorrektpappa on Oct 26, 2017 | 2 comments 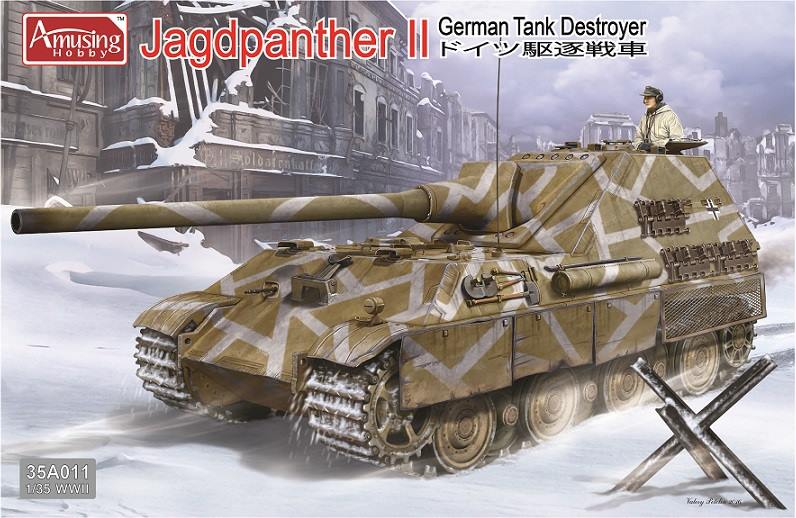 The Jagdpanther II is a pure fictional tank, or tank destroyer, as the Panther II was cancelled in favour of the E-50 Standardpanzer, but if the Panther II had been made it is only logical that there would’ve been a Jagdpanther II as well – and it was proposed by Krupp engineers. In November of 1944, a project called Panzerjäger Panther mit 12,8 cm L/55 (Pak 80) was being worked on which could’ve become the Jagdpanther II, but which didn’t happen. 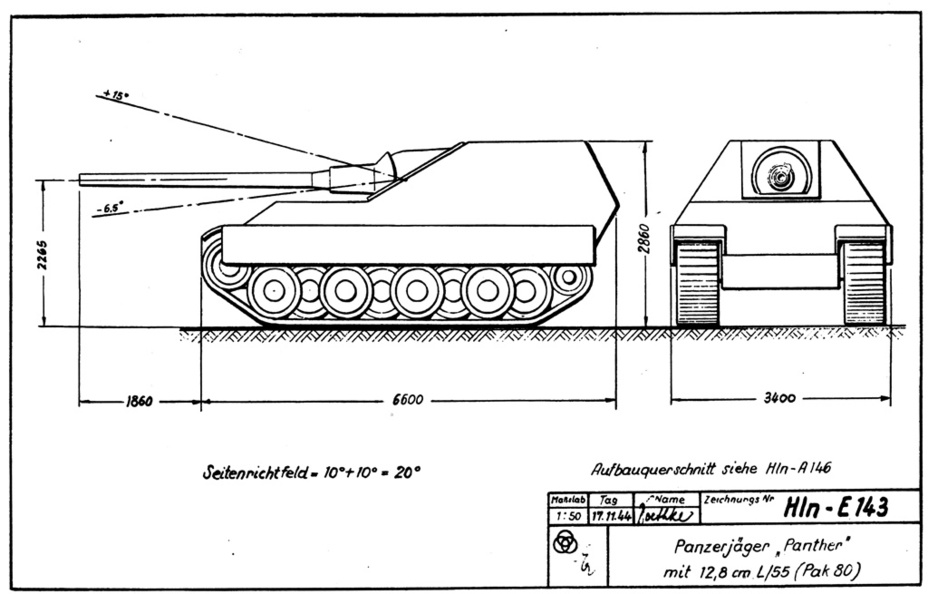 When the Panther II got cancelled some work with Panther Ausf. F continued which led to the development of the new schmalturm, i.e. the proposal for the new standard turret for all future medium tanks, and this turret would certainly have been used on the E-50 if it’d happened. This could imply that the Jagdpanther II could have been made after all but under the designation E-50 Jagdpanzer?!

This is what I love about these paper panzers because a lot of it is pure fictional which leaves many details open for speculation – and huge freedom for us modellers to create what WE think could’ve happened! Using the model as a canvas for creating art in a sense!

Amusing Hobby has created this Jagdpanther II influenced/based on the Jagdpanther II in World of Tanks for sure since no other designs for this tank destroyer exists apart from the Krupp design, and certainly not with a rear mounted gun like the Ferdinand/Elefant.
There are huge benefits of mounting the gun in the rear, but how on earth they did engine maintenance without removing the main gun I don’t know… This is however something we can ignore for now, and since the Ferdinand/Elefant exists it would be possible.

I’m really impressed with Amusing Hobby and the quality of their kits! They are challenging other manufacturers to raise the bar regarding detail and quality – and still keeping a low price. Quality wise they are comparable to Tamiya, which is my golden standard, but with more PE parts, and sometimes even more detail.
Tracks is an area where Amusing Hobby is both excellent, and a bit so-so if you ask me… Their tracks are often very detailed and accurate, but this leads to overly complex assembly if you like me only build “working tracks“.

The tracks on this Jagdpanther II are some of the most complicated I’ve ever built – and I mean complicated! Each pair of links consists of five different parts, some very small, and I spent hours trying to glue these together as working links but still enough for them not to fall apart. It’s a good thing that you get extra links because some parts had to be discarded due to the fact that they got cemented together. This isn’t a problem with the kit, just a problem with this modeller… But damn the tracks looks good when assembled! Sadly I only managed to build 1/3 of a track before I gave up and ordered Friulmodel ATL-21 tracks. 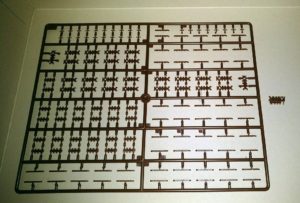 Track sprue and one assembled link.

Due to the side plates the Jagdpanther II has to use King Tiger/Jagdtiger transport tracks, the narrow ones, and that’s why they are complex to assemble. Normally I love using “fat” tracks on my models, but in this case it looks really sleak and modern!
I do believe that the tracks in the kit can be assembled in working condition but it proved too hard for me. Perhaps with CA glue I would’ve been more successful but I try to avoid CA glue at all costs when building scale models apart from PE because it’s too brittle and it’s hard to sand/scrape off where it shouldn’t be.
If you prefer rigid tracks then the assembly is easier, and the kit comes with a guide jig for easier assembly.

The kit comes with PE (Photo Etch) parts for side plates/armour, optional side grille, tool holders, vent grilles and locking clasps. It also comes with a copper wire for the tow cable which looks really spot on for 1/35 scale. The PE are of high quality and very easy to work with, but they are very thin – which is more accurate according to scale but it means you have to be a bit careful when handling them. I don’t mind being careful if it means looking great.

Decals are a bit boring though and very basic. Two sets of digits from 0 to 9 and two types of generic Balkenkreuz, one slim and one normal. But being a paper panzer this is to be expected since there are no real tanks to base the design upon, especially since this would’ve been a 1946 model by earliest. It’s up to you as a modeller how you want it to look and a good opportunity to have a dig around amongst all the spare decals you’ve collected. Never throw anything away because you never know when you need spares! 😉

The hull is basically two pieces. One lower and one upper, and the quality is top notch! My upper hull suffered from a bit of warping on the thin frame between the gun mantlet and the engine cover but that was easily solved by gluing the engine cover in place. Just be careful because this piece is thin and fragile.

Road wheels are looking fine but they are not designed to be easily spun when assembled, despite polycaps, but enough to get the tracks on at least. This leads me to the only thing I’m not overly happy with on this kit and that’s the torsion bars. Every torsion bar suffers from a sink hole. It’s easily fixed with putty – and it’s behind the road wheels, but still… They do work as torsion bars though and they can thus be used to make the tank look more realistic than some rigid models. I just wish the torsion bars were a tiny bit sturdier, had better mould design to avoid sink holes and a different way to mount the road wheels so that the polycaps made the road wheels spin more easily. This is purely just “nice to have” features and nothing that shows when assembled, but I don’t mind being picky when reviewing such a nice kit like this is!

The torsion bar suspension is enforced with dual coil springs on the Jagdpanther II and this is done very nice in this kit. The spring are actual springs and not something moulded as a rigid piece which we often see on kits. I initially tried to assemble the coil springs without any glue or cement at all but they fell off all the time so I used a tiny bit cement on both ends of the coil springs and that was all that was needed. Be extra careful here so you don’t by mistake drop cement anywhere else because that will lock the suspension in place. I did that on one of the coil spring units and I had to carefully work it loose and clean it up before putting it back together again. Well worth it though but be careful.

The gun barrel is slide moulded in one piece and this we all LOVE! I hate glue lines, or part lines – or any lines at all, on my models and I spend most of the time spent building models on just sanding, scraping and polishing parts to make them look rigid and not glued together, and the main gun barrel is one of the main focal points on any tank/tank destroyer so by having this slide moulded is a huge bonus – thank you Amusing Hobby for this!!!

The kit has all the usual details that we can expect on any late WWII German tank or tank destroyer, and the quality of these parts are on par with Tamiya. In fact just looking at the built model and not the sprues I could’ve guessed that it was a new Tamiya kit just by looking at the details, so yet again – well done!

Apart from the sink holes on the torsion bars there’s no exhaust on the model. Not even an indication where they would be, so you’re going to have to scratch build your own exhaust pipes. If you’re going with full side plates as option you’re going to hide the exhaust pipes, but if you’re going for the side grille option then you better make some pipes. Just take two q-tips (cotton swabs) and cut the tips of them, heat with lighter and bend out the ends a little and you’ve made yourself two exhaust pipes, one for each side. That’s the quickest way I can think of, unless you’re using styrene tubing or even brass tubing. Everyone should have some cotton swabs so that’s why I used them as an example. (I often snip off the ends on used cotton swabs so I can use them later for scratch building. You don’t have to buy expensive styrene parts you know 😉 )

The kit comes with a call out card with four suggestions for paint schemes and they are made by Mig Jimenez and are of his usual quality. Use these for inspiration but don’t be scared of doing something unique here because this is a 1946 “what if” tank and thus anything goes – within reason. I’m often using red oxide primer as a primary colour when painting 1946+ “what if” tanks simply because towards the end of WWII there was a shortage in paint and pigments so they just used whatever they had, and red oxide primer was something they had plenty of. Use the model as your canvas and create something interesting!

The assembly instruction is good but I struggled with a couple of the smallest parts and I had to use a magnifying glass. To be fair the parts were tiny but the text in the instructions could’ve been a wee bit bigger. Yes, I’m getting older and my eyes are not what they used to be…
Like I’ve said before, please make the assembly instructions available for download as pdf documents. It makes it a lot easier to zoom in on hard to see/read details.

The English translation in the instructions is flawless and not “Engrish/Chinglish” and the first line you read on the second page is “Please check all the following items. If anything is missing or damaged, contact your dealer immediately.” How about that Squadron?! Replacing missing or broken parts??? Amusing Hobby knows the score – and the importance of customer care!

The verdict is simple – 4 out of 5. If the suspension bars hadn’t suffered with sink holes, the road wheels had better mounting and exhaust pipes had been included it would’ve been a clear 5 out of 5 – which I’m not going to hand out often! Amusing Hobby is a manufacturer to watch out for because they are surely capable of making kits that are on par with Tamiya – and then supply even more details like more PE and extras!

What’s important to mention here is that this kit costs less than a similar Tamiya kit. How they do this I don’t know but sort out minor issues like the sink holes and you’re top of the line in my book! Being a modeller today is such a joy because quality is so good today 🙂

I’m building the Amusing Hobby 35A015 E-100 at the same time (review comes in a few days) and I’m equally impressed with that kit.

Thank you for making these two kits Amusing Hobby! I’ve already got the 35A016 ordered for a group build in January and I’m really looking forward to building a really bonkers E-100 Flakzwilling/Flakpanzer!