Posted By politisktinkorrektpappa on Nov 8, 2017 | 0 comments 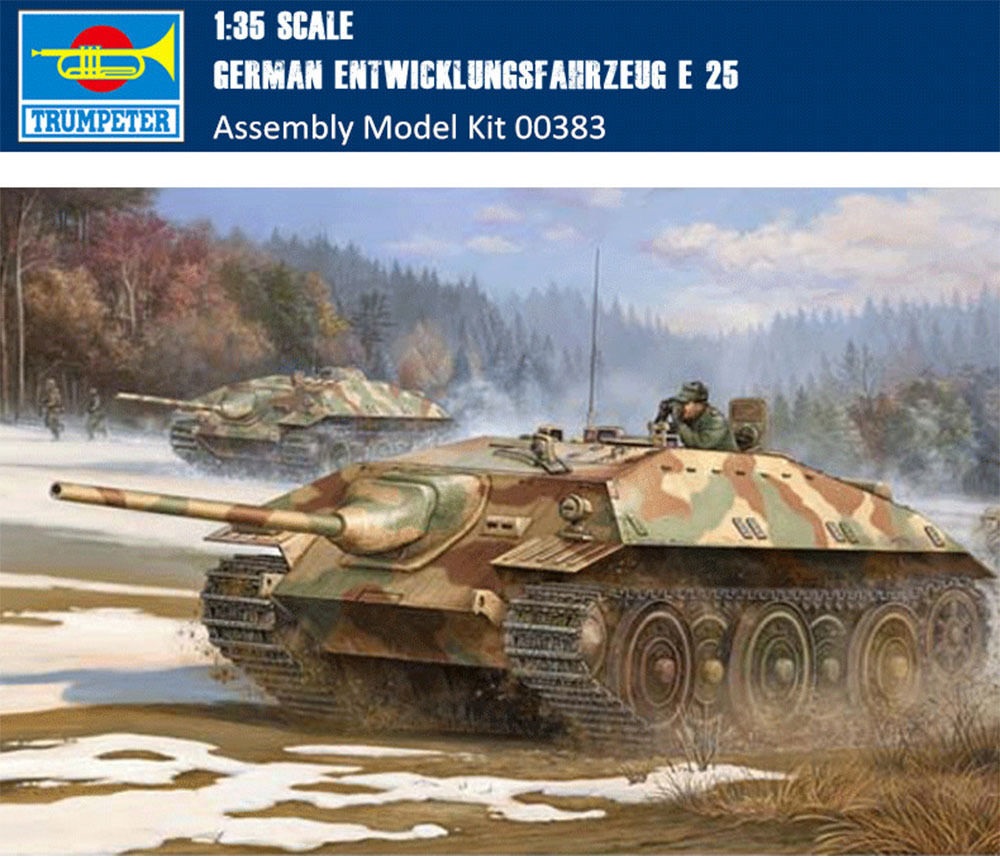 Entwicklung, or the E-series, was a line of proposed standard tanks in order to focus on standardised components and where new model could me build with already proven parts like generic suspension etc.
Recently there’s been a lot of talk about the Entwicklung range as what would have been the next step for the German tank development but this is probably more fiction than truth because no real tank ever came out of this programme. The E-100 who many thinks was the successor to Maus is in fact a reject that was stopped before it went any further.
To my knowledge the E series were proposed first in April 1943, and again in March of 1944, but by looking at the March 1945 production proposals no E-tank was listed and this probably means that all designs were rejected.
The E-100 was initially designed as the Tiger-Maus but were rejected since Hitler preferred the Porsche Maus, and it was later redesigned, and yet again proposed as the new super heavy tank in 1943.

Luckily when dealing with paper panzers we don’t have to take such things into consideration because fictional tanks are what we make them, and re imagined they can be a formidable lineup for sure!

Due to a recent project where I’m building an E-100 triplet (panzer, flakpanzer and jagdpanzer E-100) from Amusing Hobby I got the idea to not just build the three E-100 they’ve released so far but also build a complete lineup of the Entwicklung range!
The original proposals were E-5, E-10, E-25, E-50, E-75 and the E-100 and I think they all exists as scale models. I’ve for sure seen all but the E-5 but that can perhaps be scratch built or by modifying an E-10 depending what the purpose with the E-5 was? Regardless this could be a fun “never-ending” build for sure so picking up the Trumpeter E-25 had a bigger purpose than just being a cool model!

Many of the Entwicklung kits are more based on the designs by World of Tanks rather than official ones, and let’s not forget that many of these proposed tanks only ever existed as a name on a piece of paper – no blueprints, no prototypes, which means that World of Tanks is the only “source” of reference.
This is not important and scale modelling doesn’t have to be only based on facts, and this is where we are with this E-25!

The kit is very reasonable priced but you’re meant to buy the workable track links too, which adds to the total price, but despite this it’s still a very reasonable price.
I’ve built Trumpeter kits in the past and I’ve been happy with the quality so far but my E-25 kit suffered from a fair bit of flashing. If this was because of worn moulds or just bad luck I don’t know, but it’s easy to clean up and to a certain degree we are spoiled as modellers today with regards to the fantastic quality we have on virtually all new kits that are released!
Trumpeter makes up for any extra work by including lots of options in the kit because since this is a fictional tank there are no rules, and with no rules you as a modeller are allowed to built your E-25 and equip it accordingly. I chose to build mine closer to the World of Tanks version, which meant some scratch building and adding extra parts from other kits, but I omitted the World of Tanks anti-aircraft turret on their E-25 and instead made it as low profile as possible because that’s how I see this little sneaky sniper! 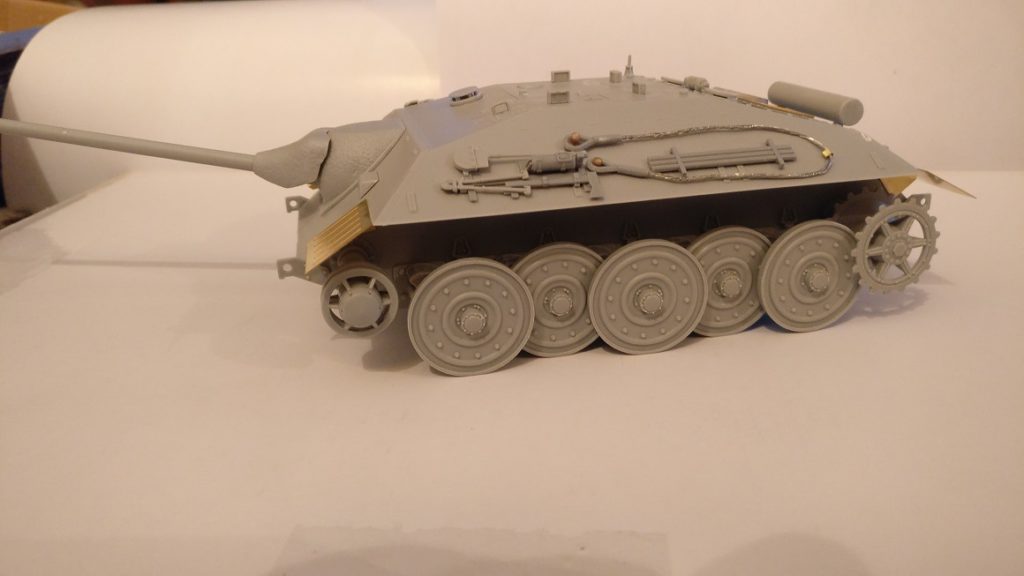 The kit was easy to build and apart from the mating of the lower and upper hull, the fit was pretty good. The lower hull was too long and required some trimming to fit but that was simple.
The kit comes with no tools and there are nothing to be mounted on the side panels, only the rear plate. I filled most of the holes on the rear plate and fitted tools and racks to the side panels, just like the E-25 in World of Tanks. This is how I think a real E-25 would be outfitted if it’d ever happened. Remember that each model you build is your model and you can treat it as your canvas if you want to!
I like building accurate replicas of existing tanks but I also like to do my own interpretation and do any changes I prefer. This is a hobby after all… 😉

Since I don’t like “magic tracks” or rubber band tracks the working track link option was a given, but the assembly was rather fiddly to be honest and harder than I thought it would be. You join each link by inserting two small pegs, and there are two types of pegs (track pins). One outer and one inner, but even though I knew the difference of these two different pins I just couldn’t see it with my eyes. One is supposed to stick out a bit further but even if they do so I couldn’t see it.
I wish these pegs, or track pins, could’ve been just a tiny bit longer because it was sometimes hard to make them lock the links, and they are really tiny! Luckily each pin is attached to a bigger piece that you’re supposed to snap off when assembling to handling was easy, just that it was fiddly and took a very long time. The results look great but I expected the track horns to be hollow and not solid as they are in this kit, but perhaps these track links had solid horns? 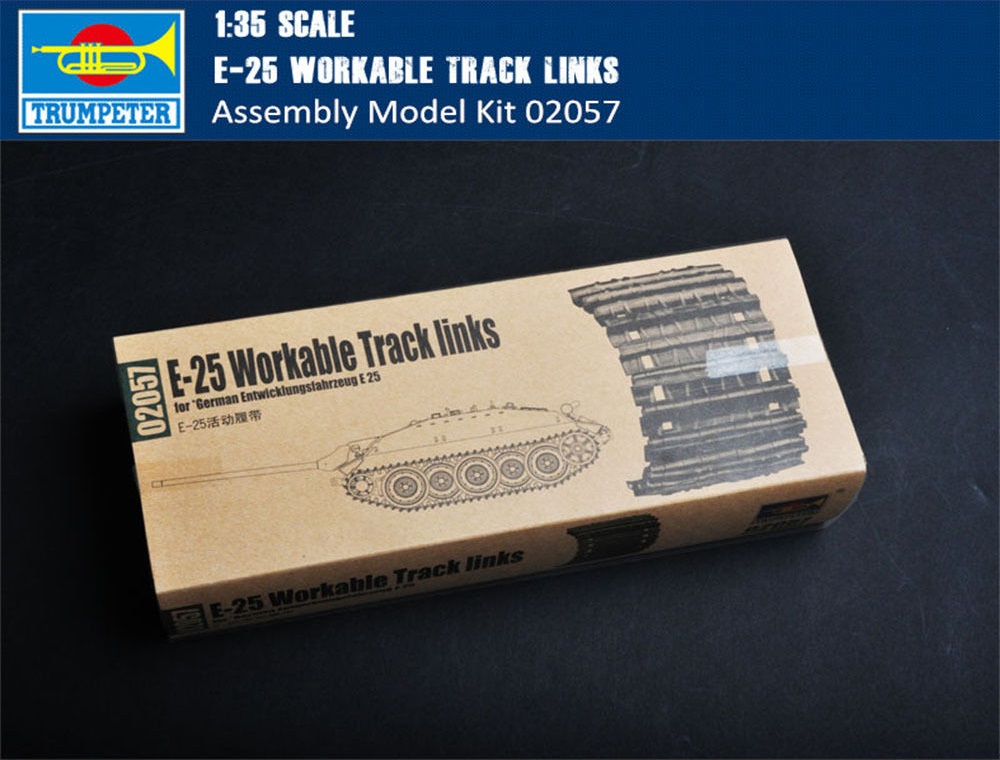 This is far from one of the better kits from Trumpeter but as a canvas it’s a great kit, and experienced modellers remove flashing and make required modifications with ease and it’s no hard task for inexperienced modellers either, it just takes extra time. The finished model looks much better than expected so I’m more confident making the Entwicklung lineup might just happen!

Plus points for including a lot of options for both the roof and the rear plate configuration! It’s really up to you as a modeller to decide what your E-25 is going to look like!
Also plus points for including choice of PE parts for certain parts.
Minus points for flashing and fit problems for the lower hull and some of the panels and hatches.
I would also have liked to see a couple of basic tools in the kit. I’ve got boxes full of spare parts but not everybody has that, but since the kit is designed without tools I guess it’s fair enough. 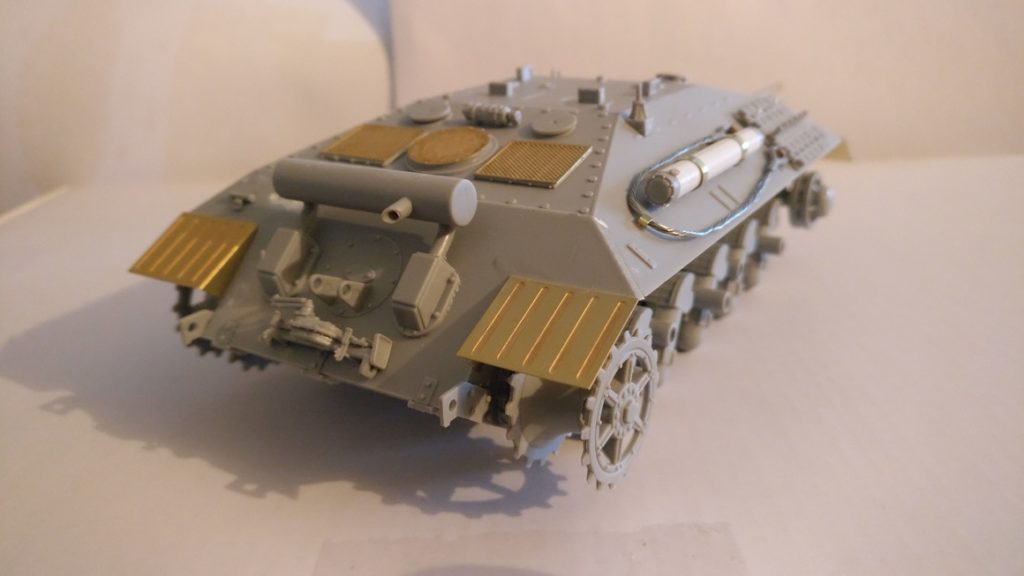 Initially I was a bit disappointed with the sprue quality and that the lower hull didn’t fit the upper out of box, but the completed kit looks a lot better that I expected so I have to approve this kit!
I give it a 3 ouf of 5 by looking at the end results and the freedom to build it to your liking. It’s still miles better than any kit from the late 70’s or early 80’s and the finished model is everything but wonky! I built the whole kit in one sitting, excluding the tracks. They required three sittings in total but perhaps less time that the kit itself. For me having working tracks are worth the effort, even when I glue them down in the end because they have a more realistic sag if you ask me. I also, for some odd reason, find it therapeutic to sit down and do the tracks, link by link, one step at the time. It takes a long time but the end results are usually worth it – otherwise I wouldn’t use Friulmodel tracks so often! 😉