Posted By politisktinkorrektpappa on Nov 10, 2017 | 0 comments 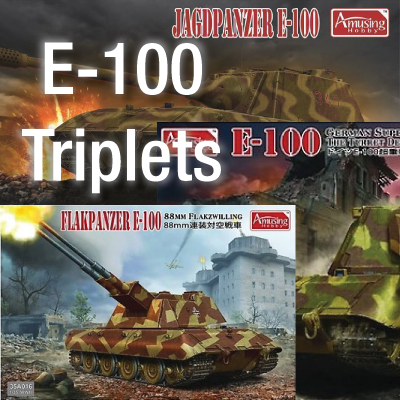 Like the title says – this is a triplet build with the three different 1/35 E-100 variants from Amusing Hobby and they’re going to be built in stages. The first E-100 (Panzer) is already built and is waiting for paint whereas the Flakzwilling is built as a GB next year. The Jagdpanzer will be built when the Flakzwilling is done. The plan is to paint all three of them at the same time since they’re all going to be painted with the same colours, but not the same camo schemes. This in order to have the exact same colour and tone.

I know all but the E-5 is available so that might have to be scratch built, but I haven’t fully investigated this yet.

The plan is to make a diorama/backdrop that looks like some sort of factory and add each model to this, which means that this is going to be a big one for sure… I don’t know yet where to put such a contraption but that’s a minor thing to solve. I’m going to build them like the E-series were picked up again sometimes 1946 or so as a “what if” scenario – even though I know they were proposed earlier, and never got the go ahead apart from some work on the E-100 and some that might’ve ended up in the Panther 2 project? It should sit nicely next to my Haunebu II diorama for sure!

I love these a bit bonkers and often pure fictional models where there are no rules, just you and the model as a canvas, and you can do whatever you like since they never existed, nor in a time frame that never existed. I love the engineering behind these mechanical marvels and that’s why I’m building scale models!

I will add each model here as and when they’re built and eventually the lineup is completed. It all starts with these three E-100 from Amusing Hobby!

It’s going to be fun for sure!

The project is also listed here on scalemates.com