Posted By politisktinkorrektpappa on Nov 12, 2017 | 0 comments

This is the bonkers of all bonkers projects – the Entwicklungsfahrzeug Sammlung; a complete lineup of all E-series tanks and variants in 1/35 scale!!!

But all these tanks are fictional so how, why and what to base it on then? Well, there have been more than a few pure fictional E-tanks throughout the years stemming from computer games, images and fictional scratch building. I’m going to base the Entwicklungsfahrzeug Sammlung on the actual proposal back in 1943 and thus “only” build the E-5, E-10, E-25, E-50, E-75 and the E-100.

I wrote “only” because IF they had been built there would’ve been variants soon thereafter, just like the StuG on Pz III & IV, Jagdpanzers and Flakpanzers to mention a few common, and reasonable, variants. Krokodil variants I find pure fictional so they are – for now – out of question. The E-5 is also possibly something that was dreamed up post WWII because I can’t find any records of it whatsoever whereas I can find design proposals for the others. Well, I can find references to design proposals, not the actual documents. In all honestly the only one that actually had some work on it was the E-100 that had it’s prototype chassi and fenders built, but that’s about it. This is however more than enough for someone who’s into “what if” and “paper panzers” so I have begun compiling the project!

This project actually started quite some time ago, I just didn’t know the scope of it yet. I love big tanks and after I’d built the Takom Maus V2 I wanted to built an E-100 to compare the two. I thought it would look interesting (read; cool) with the two of them in a vignette! After ordering the first E-100 I discovered that there were others with other turret designs, and I quickly realised that the E-100 I’d just bought couldn’t have existed since its turret wouldn’t have existed, so I searched and found a “better” E-100. Now I had two E-100 and there was more to come…

I love jagdpanzers/tank destroyers perhaps even more than the big monsters so when I heard that Amusing Hobby was going to make a new E-100 Jagdpanzer which was looking really cool I knew I had to get it as soon as it was released, and I did. Roughly the same time I joined two Group Builds over at scale-models.co.uk, one Panther and one AA gun. The Panther is easy because it’s going to be the new Takom Panther A with full interior as soon as it’s released, but the AA gun was going to have to be a flak gun due to my German angle to modelling – and a simple “88” wouldn’t do so I searched and found the Amusing Hobby E-100 Flakzwilling! A really bonkers AA gun for sure – and now I had three E-100. Two weeks ago the new Amusing Hobby E-100 Jagdpanzer started shipping and now I had four…

I’m now trying to source the right scale models for this project and the only one I’m missing is the E-5. Amusing Hobby has one that can only be bought in a bundle with another E-tank. Sadly I discovered this too late and the few bundles that exists I’ve already got – minus the 35B001 E-5 that is… 🙁 One way or another I will get my hands on this E-5. Worst case scenario I’ll just buy the cheapest bundle I can find, unless I find someone who wants the main kit and I can keep the E-5? Whatever’s fine with me!

This project doesn’t cancel, or replace the E-100 Triplets because that’s going to be presented as it is next year, but after that it’s going to grow into this project – which is in itself part of the even bigger dream project – the entire German WWII lineup from Leichttraktor to Maus, E-series and the Landkreuzer P.1000 Ratte – but that’s one never ending project for sure! 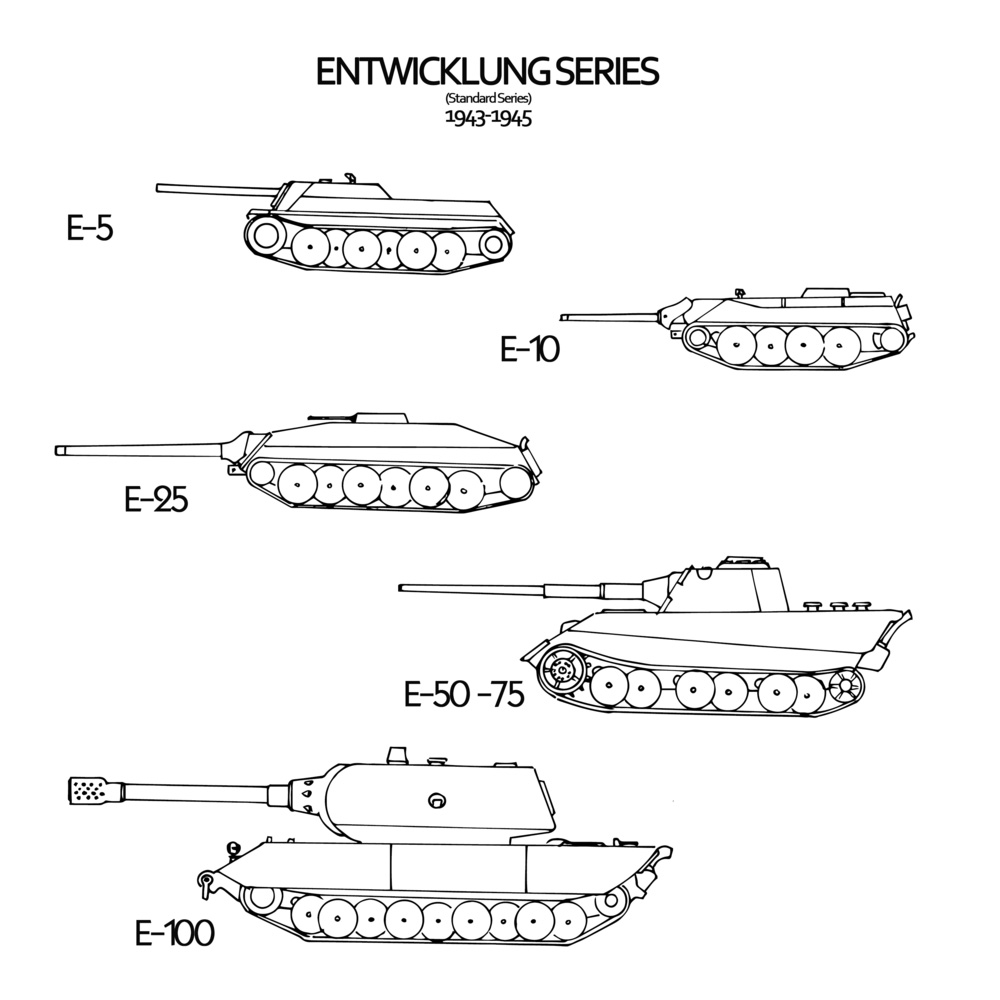 So far the lineup consists of:

There is a Trumpeter E-75 Flakpanzer available, also an older Trumpeter E-100 “StuG” – but this one is too wrong for me so I’m leaving it out. The new Trumpeter StuG 09542 is much nicer and something I will add as soon as it’s released! It’s similar to the new Amusing Hobby E-100 Jagdpanzer. A Trumpeter E-50 Flakpanzer also exists and so does a Dragon E-100 which has a badly fitting turret IMHO. I’m sure there are more to come so this mad project will likely grow in size before it’s done – if it ever gets “done”?! 😉

The two flakpanzers will be added at some point, that for sure.

So far I’ve started the Amusing Hobby 35A015 E-100 and the Trumpeter E-25 is built and being weathered at the moment. I’m starting the Amusing Hobby 35A016 E-100 Flakzwilling in January and the 35A017 Jagdpanzer as soon as the flak is done. After that it’s the rest, one at the time if I can be disciplined enough… I never have less than three kits being built at the same time – often the double, but this is going to be a project that needs planning and execution so it’s probably best to do one model at the time.

I will post updates from the project when I have something new or interesting to show and tell.

The whole lineup is going to have to be displayed somehow and I’ve been thinking of making a wide diorama with some sort of factory background, like they all are parked next to each other outside the factory – but with some wear and weathering, possibly protecting the factory? It could look good next to my 1/72 scale Haunebu II diorama that’s also being built at the moment… Also “factory-ish” design…

It’s going to take at least 12 months to get to the display phase, although I need to have something ready fairly early on to park the finished models on, but I’m not done thinking yet.

Please leave a comment if you have a suggestion for a model you think my lineup is missing? Or if you have an idea for displaying the lineup? You can leave a comment about anything. This hobby is about having fun and also hopefully making others happy and you are free to comment on anything you like both suggestions and critique. I’m really looking forward to this project! 🙂