Posted By politisktinkorrektpappa on Dec 28, 2017 | 0 comments

Winter (or not?), dodgy paint and Christmas…

Well, a lack of posting recently is a sure indication Christmas just went by and not trouble free I can add.
PostMord already caved in during September and add Black Friday and Christmas on top of that and the total failure was complete! It looks like no less than five packages are lost. One the seller tried to resend to arrive before Christmas again but it still failed to arrive and the packages that should’ve arrived in November are still lost, and since they haven’t been scanned when (if they) arrived it’s impossible to track, nor is it possible to get refunds or replacements. F U very much PostMord! We need a new postal service in Sweden instead of this Danish company that’s derailed the utterly important service!

This meant that 5 of my Christmas gifts never arrived – including 2 for my youngest son – and it also means that some of the kits I’m waiting for are still missing in action and my Takom Mk.IV vignette is stuck without the figures and the Schwerer Gustav diorama is missing many kits…
That was an update on the incoming front and why some projects are stranded for now.

We were supposed to get a record cold winter this year and although we had a few cold days earlier in December a warm front got stuck here so all we got were around +4-8°C with a recurring deluge. This meant it got damp and when damp here paint doesn’t dry at all unless isopropanol/cellulose thinner based. I’ve recently tried my best to learn how to use “pure” acrylics like Vallejo and Ammo by Mig. Ammo of Mig has never worked for me but starting doing air planes required a whole different setup of colours and Tamiya is sadly lacking in that department. I know I can mix my own colours but it’s just so much more convenient to have the right colour from the beginning – and a colour you know is correct and consistent! I’ve found almost all I need in Vallejo Air so I’ve tried and tried but due to the damp weather it’s not drying properly, sometimes not at all, and it’s got a habit of letting go. I need to take the leap to MRP (Mr Paint) one day because I’ve got all the colours I need there for air planes. Sadly their armour range is non-existent so I’m stuck with more than one brand of paint in the future regardless, but at least I can get rid of my “pure” acrylics and only use them for brush painting – and only when weather allows?!

I was given the Eduard Draken 1/48 by my younger brother and father for Christmas so I’ve now bought the Tamiya paints I need to be able to mix the correct paint and also bought the new Alclad 2 metallic paint (polished aluminium) from Ammo of Mig so this build can probably start tonight if I want to! It’s a really nice kit and Eduard has lifted this already nice model from Hasegawa to the highest level with resin and photo etched parts. It’s a lot different to build air planes than tanks and you have to plan the build much more carefully when building air planes because you can’t just leave the paint job until last. I’ve discovered I like building air planes even though I don’t know as much about them, but it’s a great opportunity to read up before each build!

The J35 Draken has a special spot in my heart because it’s the plane I remember flying above my head several times per week as I was growing up in the north of Sweden. I lived close to three different regiments and one of them was F4 where they had many J-35D2 Draken operating. I remember a girl that lived about 50 meters from me and how her dad sadly crashed his J-35D2 Draken into a mountain side. It was a terrible couple of days until the plane and pilot was found and it was all over the news so it must’ve been really hard for her.
J35 Draken replaced our J29 Tunnan and J32 Lansen and it was very futuristic with its double delta wings – and it was the first jet fighter to fly Mach2 when it had its engine upgrade.
Today F4 is no longer existing and it’s now purely a civilian airport but at the entrance is a J-35D2 Draken mounted on a pedistal to remind us of the time that was and this is the Draken I’d like to recreate with my kit!

Sadly after a lot of research I’ve decided to follow the kit and build another J35F Draken because there are just too many changes between the D version and the F version, but I will build a replica of the J-35D2 Draken 35388 (4-37). I’ve found the correct decals to use from the Swedish company mooserepublic.se and I’ve also found the correct air intakes and other parts as resin parts to convert the kit to a D version. The mound and pedestal it stands on will be scratch built.
The kit I got for Christmas will probably be built as the famous J-35F 35465 (10-66) from F10, Johan Röd, sporting the famous red tail with a white ghost flown by Vincent Ahlin until the Draken was retired in 1990 due to the hours it had flown.
There’s still time to change my mind but I’ve only got decals to build the 10-66 and it has to be built in the original Swedish splinter camo!

Many thanks to my brother and father for this fantastic present! 🙂

On Monday the group builds officially starts and I’ve yet to decide in what order to build them, but I think it’s going to be Panther A, AA/Flak and finally “Catch the pigeon” – which will be a scratch built WWI cartoon plane based on the TV show “Dastardly and Muttley in Their Flying Machines”. I’m playing with the idea of building the plane in balsa wood and rice paper but I have to design all the parts in CAD and have them laser cut so this group build might take many months to complete.

On top of this I’m also keen to start my Schwerer Gustav diorama but I’m still in planning phase. I’m currently trying to make the double track that it needs to sit on. The supplied track is straight but it used a bent track in reality in order to aim and that’s what I’m making. This diorama isn’t going to be so complicated, but it’s got a silly part-count 😉 So far it’s 11 kits and a lot of scratch built features so I estimate that it’ll take appx 12 months to build, but if the body permits and the creativity flows I might finish it in 2 months as well so we’ll have to see what/when/how it happens!

I hope you all had a great Christmas and I’d like to wish you all a prosperous New Year! 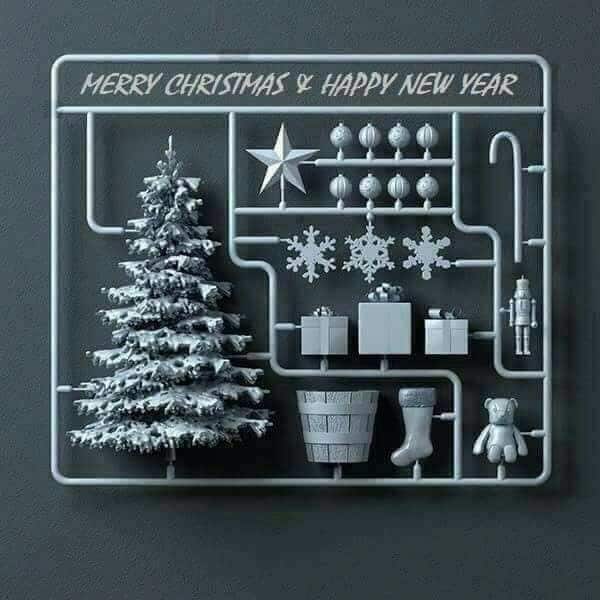