Posted By politisktinkorrektpappa on Jan 14, 2018 | 0 comments

2018 is the year of the Panther. Not the Chinese calendar but the modelling calendar! 😉

Jokes aside, there are many Panthers just being released and many of them are very high quality so this “German tank guy” is more than pleased! The last Panther I built was the old 70’s Tamiya Panther that passed its best before date not long after its initial release and the difference between that kit and this one is to great to even begin listing here so I’m going to make a normal review instead of comparing the two.

I had decided to buy a Panther Ausf. A for a group build that started on the 1:st of January 2018 and whoever of the Meng and the Takom full interior one that was released first was the one I was going to build. Meng released theirs in December so I placed an order the very same day it was released just to be sure. The first batch also came with a metal barrel as a bonus – which was nice!

I also ordered the tracks and suspension upgrade and a zimmerit decal sheet. I was sceptical about the zimmerit decal sheet after having so much trouble with the vinyl zimmerit for my Tamiya Elefant, but this was a water slide decal so I decided to give it a go. Worst case scenario I could remove it and make my own zimmerit…

It arrived only a few days later from Japan but the GB didn’t start until 2018, and I never review any kit that I haven’t built (at least partly), so that’s why this review is a bit late – but on the other hand honest and accurate! Personally I don’t understand how some people can review a kit by just open a box but that”s perhaps just me? I want to know how it builds and if the parts fit first – and that’s the type of review I want to read, not how the sprues smell like 😉 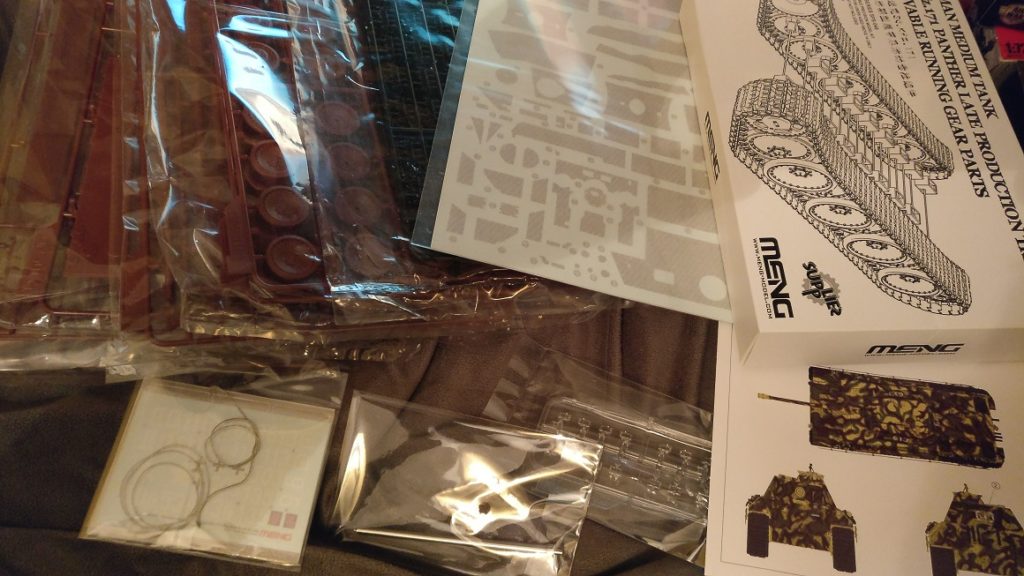 Anyhow, after a first inspection I quickly realised how well made the kit is! Superbly done textured surfaces and plenty of extras! Exactly what I like! The tracks and suspension upgrade was equally well made but oh so finicky to assemble since you had to glue two guide horns to every track link… There are 87 track links per side x 2 guide horns x 2 sides = 248 guide horns to be carefully glued! That took more than a session I can promise, but the results were great so it was time well spent. The torsion bars are made of metal and very simple to install. Top marks for detail! 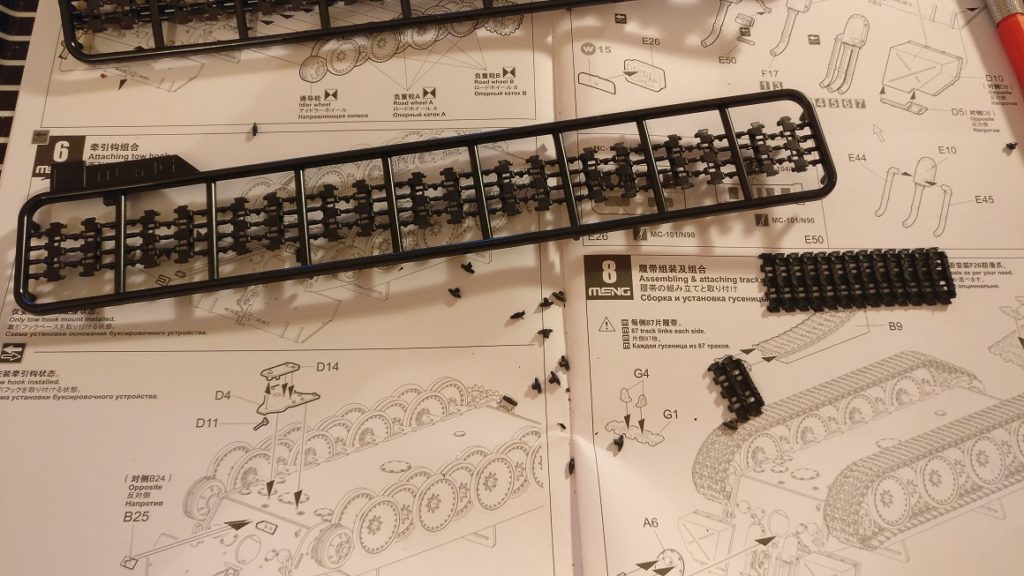 The included photo etched parts are very well done and they’ve got a clear plastic cover on both sides to protect the delicate and small parts – this I like! There aren’t too many photo etched parts, just enough for the details that benefit from being a bit crisper. The sprue quality is so good that they could’ve skipped even some of the photo etched parts to be honest.

The instruction manual was at first a bit confusing, perhaps because I haven’t built any big Meng kits before, but I quickly got used to it. Sadly there were a couple errors in it which is disappointing if you ask me! This can easily be avoided by having a QA team that simply builds the kit from the instructions… Luckily they were easy to spot but I can see a beginner having problem here when the part you need has already been used prior?! I will send a detailed defect list to Meng next week to inform them of my findings. (and yes – I’m a professional test & verification manager by trade so this sticks out like a sore thumb to me… 😉 )

I also wish there would be included a clear instruction on which parts to omit for the suspension upgrade kit, and even more important – when to apply the zimmerit decals, but no such luck. Suspension was simple to work out but the zimmerit was not and I did run into some issues but more on that later.

Meng are using a softer plastic compound than most others and at first I worried that there was going to be some warping, but there was none. In fact using softer plastic means less chance of bits breaking off in the box – which is a huge bonus since my last Dragon kit sounded like a maracas by all the broken parts in the box… The colour of the plastic parts, apart from tracks and clear parts, is close to red oxide primer – which is great if the kit has a scuff down the line and the paint chips off. It’ll look like primer! This is a good feature.

Now onto the zimmerit then. First it took a lot of planning to apply the zimmerit in the correct order – and this was hard since there were no instructions apart from a map of which bit went where. We armour modeller usually just builds the whole kit and then apply primer and paint – and then apply the decals. Here you really have to think more like a air plane modeller and apply the decals at the right stage. I had to cut a few decals in half in order to make them fit because I had build too many things, but this was a good idea because I early on discovered that Tamiya extra thin cement completely dissolves the zimmerit decals!?! So if you’re going to use these zimmerit decals be careful with your gluing. I also had to cut the zimmerit decals where it wrapped around a sharp edge. It didn’t stick properly otherwise. Tamiya extra thin cement was useful in gluing down stubborn pieces of the zimmerit decal but only very carefully since too much would dissolve it…

The zimmerit looks really good but the printed pattern is sadly way too thin and this can become a problem if you use any type of thicker primer and paint. I’ve seen a test where the pattern more or less disappeared under the layers of paint so be very light with your paint if you’re using these zimmerit decal sheets! I almost regret using them but I started so I committed to use them and I’m just going to have to be careful when painting the model – and don’t use pure acrylic paints and instead go for Tamiya semi-acrylic paint because you can spray it so thinly. 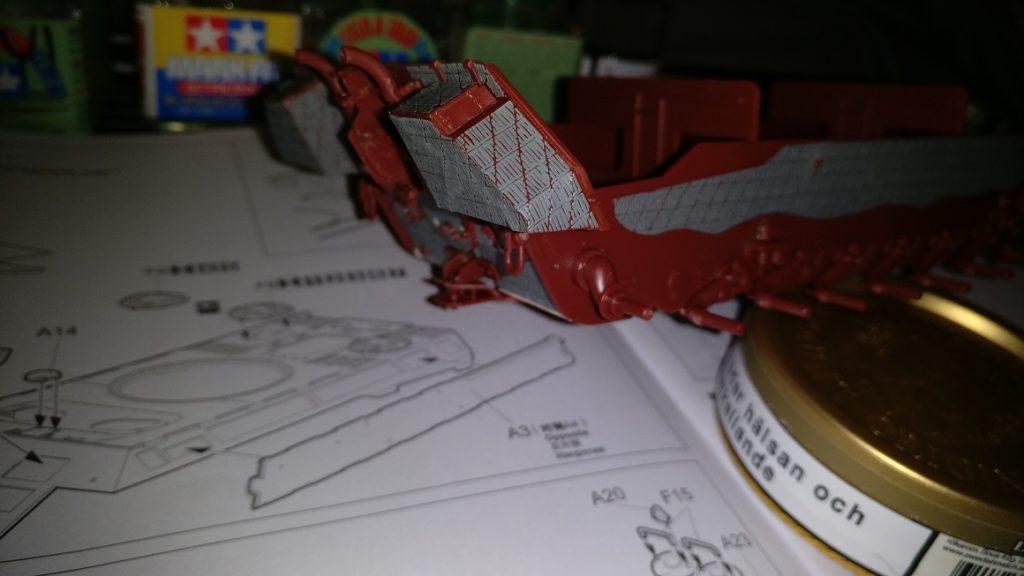 I’m doing a lot of research on the tank I’ve chosen for this GB so it’s not finished yet, but more than enough to write this review and I can easily say that there’s going to be many more kits from Meng on my desk during 2018 and onward because it’s been such a joy to build! 🙂

The base kit itself can only receive highest marks – despite the errors in the instructions! That’s something we have to live with with 1:st editions I guess… One easy 5 out of 5!

The same goes for the working track and suspension upgrade – 5 out of 5 whereas the zimmerit decal sheets only get a 2 out of 5 for being too thin, but I understand that it would be very hard, if not impossible, to make them with the correct thickness this way so take it for what it is. If you want an accurate zimmerit then make it yourself I think. Sorry Meng…

If you want to build a really nice Panther Ausf. A then look no further! This is a really well made kit and it’s been a joy to build!!!

Here are some build photos. I will update the album with the rest of the build as I progress further.