Posted By politisktinkorrektpappa on Mar 1, 2018 | 0 comments

I live in the south of Sweden – a place I partly moved to in order to avoid snow because I’m not a fan of snow. In fact one might even say that I hate snow! This is what I woke up to on Tuesday morning… sigh. 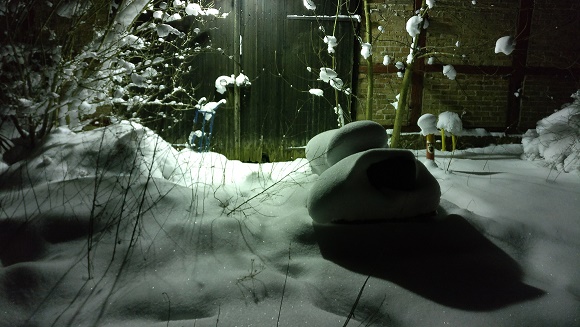 The day before this there wasn’t a single snowflake outside, nor was it cold, but most of Europe were given this gift by the easterly winds and a lot of it!

The schools are closed and many major roads are closed every now and then due to accidents so I’ve decided to stay indoors until it blows over! A perfect opportunity to do some modelling!

I’ve decided that my Mark IV vignette is done. I’ve been poking at it for several weeks now, adding a few strands of grass here and some patches or brown paint there and unless I say stop it’s never going to be finished so now it is! This was my first ever vignette/diorama so I’ve made just about every error I could, but learned loads doing it, and I’ve thoroughly enjoyed it!

Here are some mobile camera photos of the thing. I’m currently (and have been for a long while) setting up a new modelling area and will make a dedicated photo booth so for time being it’s a mobile camera and some pieces of white paper for backdrop, and whatever light there’s in the room at the moment – but you get some sort of idea at least?!

I’ve also started to use MRP (Mr Paint) lacquer paint and after an initial period of learning how to use them I think I’ve got it sorted out. 12 PSI seems to be the max pressure and I get the best results with a 0.2 mm needle and nozzle. I normally use a 0.15 and a 0.4 mm needle and nozzle but the 0.15 mm produced back pressure in the airbrush so I opted one size bigger and it seems to work.

You have to be much thorough with the prep work because the paint is so thin. Every little minute blemish and scratch will show up when painted but this’ll make me a better modeller in the end so I don’t see it as a problem! Getting used to high gloss paint is a different story since I’m so used with Tamiya ultra flat paint, but I’ve got some flat base from MRP to experiment with later, and you always finish with a flat coat on armour anyway.

Yes, I’m painting armour with MRP because they released paint ranges for many countries so I ordered everyone they’d made for German armour to give it a go! So far I’m really impressed!

I’ve also got the 1/48 Eduard J35 Draken on the bench at the moment and that’s being painted with MRP Swedish colours and they are spot on with regards to colour!

I’m going to have to develop a new technique for weathering since I don’t think things like hairspray technique is going to work as well with lacquer paints, but perhaps I’m wrong? We shall see… Using oil paints, filters and washes will be much simpler with lacquer paints since they’re already glossy. I’m not going to abandoned Tamiya paint anytime soon but I like working with MRP so far. It’s a lot smellier though…

The “Year of the Panther” is exciting and I’ve built a Tamiya Panther and most of the Meng Panther Ausf. A, and the Rye Field Model Panther – and the Takom Bergepanther are ordered and on their way, so I currently do a lot of Panther research. The limited reprint of Panzerkampfwagen Panzer by Culver & Feist is going to be a huge help doing this! If you’re taking part in the Year of the Panther celebration and haven’t yet ordered your copy then do so quickly because it’s limited to 500 books and most (in not all?) have already been sold… I wrote several emails to Feist Books until they agreed to ship to Europe – huge thanks for this!

I’m still working hard on reducing the corner of shame so I can continue my work on the Entwicklungsfahrzeug Sammlung and also begin the huge project Schwerer Gustav in the battle of Sevastopol. I’ve got all the kits in the stash and I’ve got most of the diorama materials, apart from some 1/72 scale flocking and static grass (if it’s even possible?). I’ve changed the design more than a couple times in order to reduce the over all size of the diorama – without making it look crowded or cluttered, but I think I have a basic layout that works now and the rest will have to “fall into place” as and when I do the actual build! The display cabinet it’ll be built into is going to take up a fair bit of floor space, but it’s going to be a nice piece of furniture if I can pull it off the way I have it in my head? I hope to finish it before the end of 2018 but we’ll see… 😉

I hope you haven’t got as much snow and storm winds like we’ve had the last couple of days. If you have then just lock the doors, shut the curtains and start a new model kit and just wait for sprint to arrive!!!