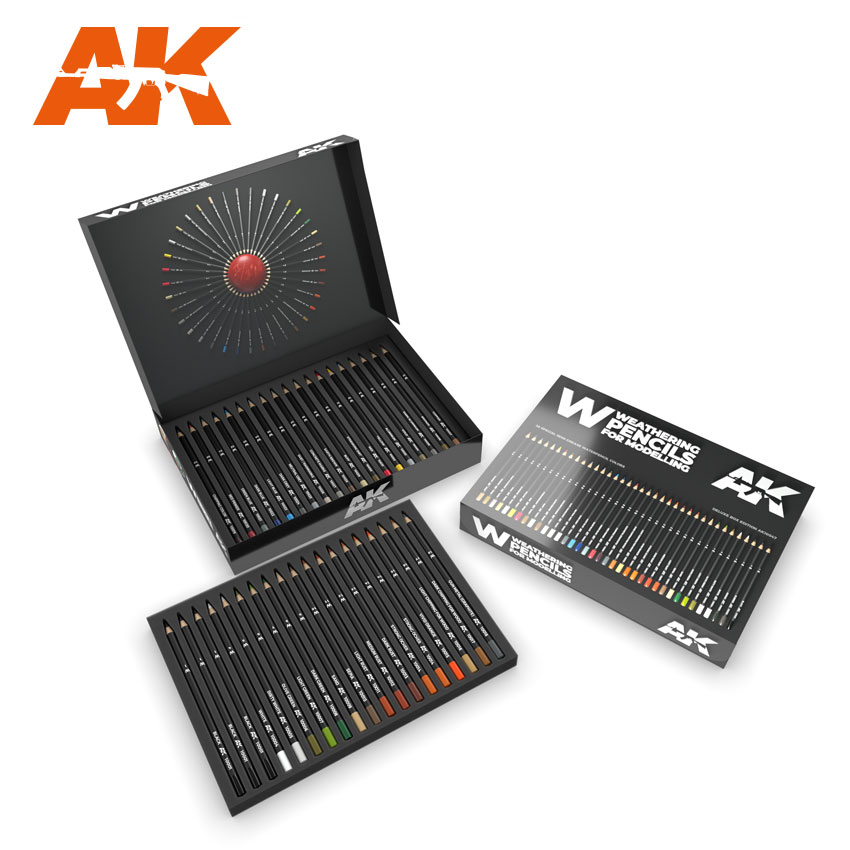 Watercolour pencils?! Is this the latest and greatest for paint and weathering or is it something that we buy on a whim and never use again? (let’s be honest here, we all have bought certain paint and weathering products after watching someone using them with great results and after a couple miserable attempts we put them away to never use them again…)

I know a selected few have been using watercolour pencils for weathering and I’ve never really understood this to be honest. Just the description “watercolour” should make you react because to my knowledge from arts and crafts in school is that watercolour never cures. It’s always soluble in water. -But what about pigments then? I hear you say? Yes, but we use them sort of last in the weathering process and often together with some sort of thinner to fix them in place. They will make a mess if you go at them with a wet brush but compared they are quite stable. Watercolours in my mind aren’t…?

Some people use clear coats between each layer of paint, and weathering, thus giving the scale model an impregnable layer to protect everything underneath and that would surely ensure that watercolour weathering is safe, but people like me who really try to avoid varnishes and clear coats have to think about what products we use and in what order to not make a mess. My reason for not using clear coats unless I really have to is that it changes the texture and even the reflection of the paint, thus making it a sort of filter. I’m talking about matt paint here, not glossy, because glossy paint like clear coats whereas flat or matt paint changes imho.

But like I’ve said I’ve seen people using watercolour pencils on their scale models with fantastic results, both dry and wet, and the only real issue with using watercolour pencils from your crafts store is that the colour range is catered towards painting flowers, animals and landscapes which isn’t exactly optimal for us scale modellers, and this is where AK Interactive has solved that problem!

Looking at the released colours it should be all we scale modellers need!

They have also made “Weathering Pencil Special Sets” which consists of 5 pencils in each set. This is probably the best way to test these new watercolour pencils. Grab a set and try them out. If you don’t like them you haven’t lost much because they are cheap! You can always donate the pencils to your kids if you have any, if you don’t like them that is…

Lots of different colours but as per usual less for AFV modellers and more for the aviation modellers, just like all paint manufacturers out there. AK Interactive is probably the only one, apart from Ammo by Mig, that’s really trying to cater for us tank modellers but this is only an initial release of these watercolour weathering pencils so we’ll see if they extend the range further down the line?

I’m not sold yet by these watercolour pencils. It’s not because of how you use them because I think it’s brilliant to have pens and pencils for both paint and weathering because you can be precise and you don’t have to grab a brush or an airbrush to add a tiny detail, you’re already ready by picking up the pencil! Ok, perhaps adding some water too, but you know what I mean. My worry is how durable the watercolour pigments are down the line? I live in a big old house from 1880, made with unfired clay bricks and whitewashed walls. It’s a lovely house and a pretty estate it sits on but it is damper than a modern house for sure and certain things just don’t work. During autumn and winter the salt in the kitchen goes lumpy after adsorbing moisture from the air and if I don’t store my BBQ spice mixes in airtight containers they get lumpy, soggy and looking pretty unusable. This obviously is a cause for worry with regards to watercolour on my scale models? Ok, we’re not talking soaking wet here, just humidity. I’d just be gutted if something goes wrong after the hundreds of hours we spend on our hobby. I’m not the only one living like this. In fact there are millions of people living in damp climate and their scale models are probably fine so my initial worry for using watercolours as weathering might be unjust and wrong?!

These pencils are cheap so there’s no reason for me not to try them. They should cost 1€ (~$1 and less than £1) each according to AK Interactive which is super cheap if we’re talking about paint and weathering products! I won’t buy the whole range just yet though but a couple of them to run some longevity tests to see how secure they are to use and how we can fixate them without changing the texture? Other people can try them for the artistic features in weathering but I’m going to focus on my fears and hopefully prove me wrong! 😉

What’s you take on the AK Interactive watercolour weathering pencils? Have you tried them? How do you fixate them?

I’ve got a lot of the AK Interactive weathering range already and I love their streaking grimes, rust, chipping fluids etc and I think they’re the most interesting manufacturer of weathering products right now. Also their mud and texture effects range is fantastic for making vignettes and dioramas and AK Interactive have really upped their game the last couple of years which I really appreciate as a scale modeller! These watercolour pencils I’m not so sure about though but we shall see…? I might be wrong…